An explosion in NATO member Poland, near the Ukraine border, on Tuesday sent shockwaves across the world, with fears of a direct confrontation between the alliance and Russia.

After the incident, Polish President Andrzej Duda said the explosive that killed two people in the eastern village of Przewodow was “most likely Russian-made”.

But on Wednesday, he said it was “very likely” that the missiles were from Ukraine’s air defenses.

“There is absolutely nothing to suggest that this was a deliberate attack on Poland,” he said. “It is very likely that it was a missile used in anti-missile defense, which means it was used by the defense forces of Ukraine.”

Washington and NATO have also issued similar statements, claiming the explosion was unintentional.

One The investigation is ongoing.

Here’s what you need to know.

What do we know about the explosion?

The first news of the incident was reported by Polish Radio ZET on Tuesday that two rockets hit Przewodow, a village in eastern Poland about 6 kilometers (3.5 miles) from the border with Ukraine. , leaving two men dead.

Residents of the village, with a population in the hundreds, told local media that a rocket hit a grain drying facility near a school.

President Duda said it was “most likely a Russian-made missile” but noted that Warsaw had no convincing evidence of who fired it and the incident was still under investigation.

He also described the incident as a “one-time event” and said there was “no indication” that it would happen again.

A day later, he said there was no evidence the explosion was a targeted attack and, according to NATO, he claimed the missile was likely part of Ukraine’s air defenses. 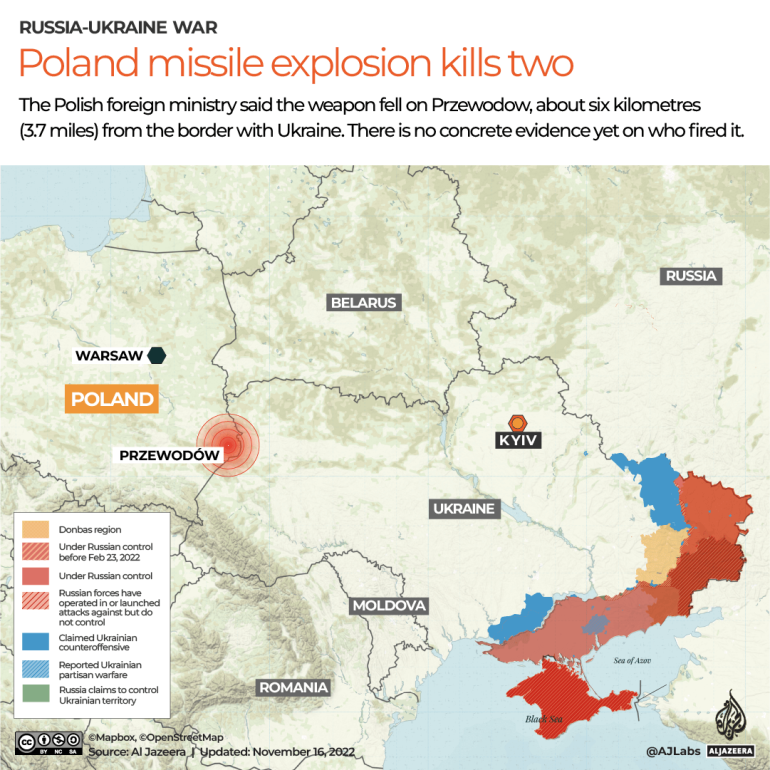 What happened in Ukraine at that time?

The explosion in Poland happened on a day Russia’s continuous shelling in Ukraine.

Moscow’s forces launched 110 missiles and 10 Iranian-made attack drones across the country, the general staff of the Ukrainian armed forces said, leaving millions of households without power.

Ukraine said more than 70 missiles were shot down, but some hit the city of Lviv, near the border with Poland to the west.

“The explosion in Poland… just added to the sense of crisis,” said Hull.

The turmoil began to “relieve” on Wednesday, when it was reported that the explosion was the result of Ukraine’s attempt to shoot down a Russian missile.

“NATO member after NATO member is now backing down and calling for caution and saying they are waiting for the results of an investigation. [into the incident],” said Hull.

How do Ukraine and Russia react?

Ukraine was quick to blame Russia for the missile explosion.

President Volodymyr Zelenskyy said on Tuesday, without providing evidence, that Russian missiles hit Poland in a “significant escalation” of the conflict.

“The longer Russia feels unpunished, the more threats it poses to anyone within the range of Russian missiles. To fire missiles at NATO territory. This is a Russian missile attack on collective security. This is a very significant escalation. We must act,” Zelenskyy said in his nightly video address.

Russia said the explosion was caused by a Ukrainian anti-aircraft missile.

“Photos published on the evening of November 15 in Poland of debris found in the village of Przewodow are clearly identified by Russian defense industry experts as parts of Russian guided air defense missiles. Ukraine’s S-300 air defense system. forces, the Russian Defense Ministry said in a statement on Wednesday.

The ministry also said Russia’s attacks on Ukraine on Tuesday were 35 kilometers (22 miles) from the Polish border at their closest point to the NATO member state.

In a rare tribute to Washington, he praised their “considered” response after US President Joe Biden said it was “unlikely” that the missile came from Russia.

As concerns about escalation subsided, Ukraine said it wanted to get close to the site of the explosion and see information that would provide the basis for the allies’ conclusions.

What do the US and NATO say?

The United States and its NATO were cautious in their initial responses.

Asked if it was too early to say if any missiles were fired from Russia, Biden said the trajectory suggested otherwise.

“There is preliminary information arguing that,” he told reporters at the press conference. G20 summit in Indonesia. “I don’t want to say that until we fully investigate it but there’s no possibility… it was fired from Russia, but let’s wait and see.”

NATO Secretary General Jens Stoltenberg said the alliance’s member states were “monitoring” the situation and “in close consultation” with each other.

“[It is] It is important that all events are set,” he tweeted on Tuesday.

On Wednesday, NATO said the explosion was most likely the result of an accident in Ukraine but ultimately blamed Russia as the aggressor.

Talk to President Duda @prezydentpl about the explosion in #Poland. I send my condolences for the loss of life. #NATO is monitoring the situation and the Allies are consulting closely. It is important that all events are set.

Was the incident talked about at the G20?

Al Jazeera’s Rob McBride, reporting from the G20 summit in Indonesia, said the explosion in Poland “overshadowed a lot” the final day of the summit – Wednesday – attended by the foreign minister. Russia Sergey Lavrov.

“I think the point the US and its allies would make, even if it were identified as a Ukrainian missile, is that it was fired as a direct result of the Russian invasion of Ukraine,” McBride said. .

What will happen next?

The explosion raised concerns that NATO, which Poland joined in 1999, could be drawn into the conflict between Russia and Ukraine.

Poland, which has put its military on high alert after the blast, is protected by NATO’s collective defense commitment enshrined in Article 5 of the founding treaty.

If it is determined that Moscow is responsible for the explosion, which seems highly unlikely following Wednesday’s NATO statement, that could trigger Article 5, which begins discussions of a military response. potential.

While the situation is unclear, Warsaw is expected to request urgent consultations under Article 4 of the NATO Treaty, invoked when any member state feels its “territorial integrity, independence, their political or security” at risk.

Any union response would be heavily influenced by whether the incident was accidental or intentional – and for now, the first scenario seems the most likely.

Despite this, Ukraine is still asking for further investigation. 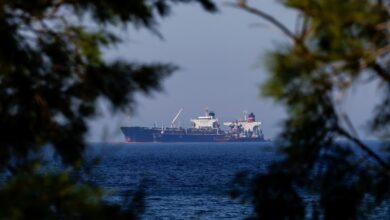 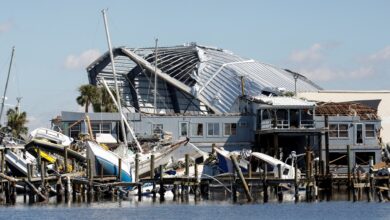 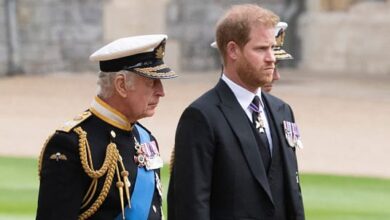 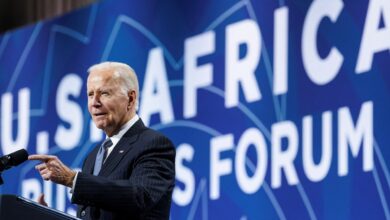