Joe Biden thanked all participants in his address. (File Image)

A video recording of US President Joe Biden disappearing on stage during an event has caused a stir online. The President was speaking at the Global Fund’s Seventh Complementary Conference in New York on Wednesday. After he finished speaking, he turned to leave the podium but stopped and looked lost. Mr. Biden also uttered some inaudible words due to thunderous applause at the event venue. The video has been posted by many users on Twitter and other social networking platforms.

Where are you going, Big Guy? pic.twitter.com/hvMjZlprWb

The event was organized to raise funds to fight AIDS, tuberculosis and malaria. A staggering $14.25 billion has been raised in this area, the highest amount ever committed to a multilateral health organization.

In his speech, Mr. Biden thanked all participants for their contributions. “Thank you for fighting for what matters. This is all about saving lives – nothing nebulous here – working with partners to ensure that all communities stay healthy and strong. – at least a chance to be healthy and strong; that people everywhere can live out the speech posted on the White House website.

“Let’s show our collective strength to face the most important challenges in people’s lives and make progress. We have a lot – a lot to do, so let’s shake hands. And thank you all for everything you’re doing,” he added.

But when the President turned right to leave the podium, he paused for a second, wondering if he had to get off from here. The host then read out a thank you note that caught the 79-year-old’s attention.

The video has been viewed almost two million times. Twitter users posted a flurry of comments.

“Is that ice cream truck music?” a user commented. “I feel like this is Scary Movie 3,” said another.

This is not the first time the US President has been ridiculed for his ridiculous antics. In April, a video showed Mr Biden reaching out for a handshake after a speech when no one was around.

The semiconductor alliance between the US and Asia can contain China 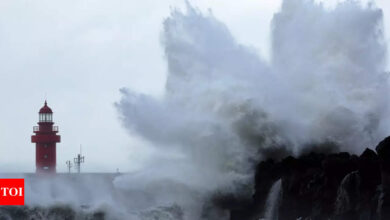 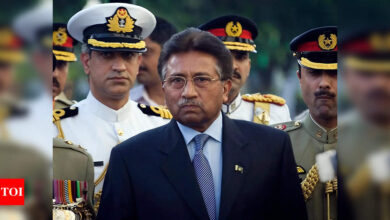 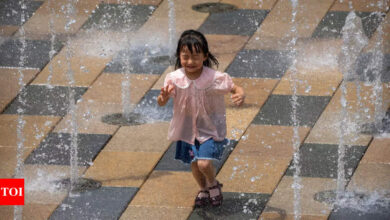